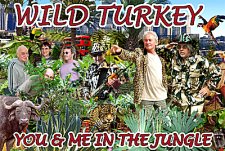 Check out Wild Turkey's website
One of the 1970s top rock bands both in the UK and in the States were Wild Turkey formed by ex Jethro Tull bassist Glenn Cornick
who gathered around him some of the most influential musicians in rock including vocalist Gary Pickford Hopkins
who later found fame with Rick Wakeman, guitarist Mick Dyche who played with Maddy Prior for many years
and legendary drummer Clive Bunker who has just about played with everyone in rock throughout the world.

They became international music stars playing alongside Jethro Tull and Black Sabbath.
Earlier this year the band reformed after a 10 year break and recently released anew studio album 'You and Me in the Jungle'.
On the back of this release the six piece band have just undertaken a 15 date concert tour which began in Italy in mid Sept
and has taken in venues in Scotland and throughout England.

Please Note - No breach of any copyrights are intended - this site is purely for Musical Historical Reference - The Items shown Are Not Being advertised As For Sale.